The Energy Transition in the Freight Transport Sector

The climate crisis demands an urgent shift in the way we live, which includes how we transport the goods we require for our everyday life. What are the measures that must be implemented to achieve this transformation in the freight industry and the challenges it will have to face?

During the last decades, greenhouse gas emissions from the road, rail, aviation, and shipping have grown faster than in any other sector. Transport is nowadays one of the largest emitting industries, without taking into account emissions from fuel production and vehicle manufacturing and from the construction of infrastructure for its operation, which adds plenty million tonnes of air pollution per year.

About 94% of the energy that this sector consumes depends on fossil fuels. In the context of the climate crisis, decarbonizing passenger and merchandise transport has become a priority. Since freight transport accounts for an increasingly important share of the industry and will continue to grow in the coming decades, its transformation plays a fundamental role in the fight against climate change.

In the recent edition of the UN Climate Change Conference (COP26), almost 200 countries worked on agreements and committed to accelerating action towards fighting climate change. For the first time, the burning of fossil fuels was referred to as one of the main causes of the environmental crisis. Several measures were proposed in order to achieve a significant reduction of emission rates and to limit global temperature rise to 1,5 degrees Celsius.

Leaders and representatives from all over the world pledged to phase down the use of coal, to reduce their emissions to net-zero over different periods of time, and to end investment in coal power, as well as new fossil fuel subsidies, by the end of 2022. On the other hand, they agreed on making the energy transition a priority and on supporting it through an international plan to make clean energies accessible throughout the world and make progress on their implementation.
Regarding green transport, more than 100 signatures were collected to end the sale of internal combustion engines by 2035 in leading markets and by 2040 worldwide. Moreover, at least 13 nations pledged to end the sale of fossil fuel-powered heavy-duty vehicles by 2040.

All this represents an important step towards the end of the fossil fuels era if we consider the enormous amount of funding this kind of energy receives and the fact that countries that take a notorious part in it supported the agreements. However, there is a long way to go regarding the implementation of projects, policies and tangible actions for the commitments to actually become realities. We should also take into account the numerous obstacles that we will find on the road towards sustainable and zero-emission transport.

Constructing a Market for Alternative Technologies

As economies and populations grow, demand for goods and services will increase, which includes transport. If we do not take additional actions to those already considered dealing with the situation, it is expected that CO2 emissions generated by the freight industry will rise around 22% by 2050.

The fact that the sector remains almost completely dependent on oil makes it particularly challenging to decarbonize. This is directly related to the high rates and low availability of alternative fuels. It is complicated for companies to invest in vehicles powered by them if their supply, production, and operation depend on the availability of a good that is still hard to obtain. At the same time, producing it and making it accessible is difficult if demand is scarce.

Prices will fall only when the market is consolidated and sales are guaranteed, though in any case freight transport rates will probably increase, which will not necessarily affect product prices significantly. However, in the rapidly evolving technological environment, we are in,  uncertainty regarding which technological solutions will turn out to be the most efficient and cost-effective in the long term makes investment and infrastructure development difficult.

The Importance of Government Policies

The price of alternative technologies is and probably will continue to be higher than that of technology powered by coal. One of the topics that were dealt with in the COP26 was putting a price on carbon to hold back the use of technologies that depend on it, which shows the impact government policies could have.

To encourage the implementation of alternative fuels and clean energies, as well as the electrification of transport, focus on the market alone is not enough. It is necessary for governments to put into effect tax and infrastructural measures, in order to support the energy transition and motivate investment and accessibility to these technologies, as well as to promote supply chain efficiency.

The change will be even more complicated if government policies contribute to making the most polluting options the most accessible ones. On the other hand, apart from considering measures to regulate the production and sales of alternative fuels and electric freight vehicles, it is important to take into account the public infrastructure required for them to operate efficiently.

Decarbonizing the Power Sector is Essential for Electric Transport

The energy transition mostly focuses on transport electrification. However, life-cycle emissions from electric vehicles depend heavily on the kind of power, battery, and materials they use, as well as on the way they are produced.

To actually be zero-emission and be able to say that the decarbonization of the sector has been achieved, the power network that feeds electric transport must rely on renewable energies and its components and production must not depend on fossil fuels.

On the other hand, even if all new vehicles were electric from now on, it would still take several years to replace all of those that still use fossil fuels and continue to operate, not to mention the problem that represents disposing of them once they come to the end of their life cycle.

One of the battery components necessary to produce electric vehicles is lithium, regarded as an essential mineral for the energy transition. Nowadays, 65% of the lithium available in the world is used for this purpose. With the measures considered mitigating the climate crisis, the demand for this mineral is increasing, as well as the commercial competition for its extraction and for the production of electric vehicles.

It is fundamental to remember that these and other minerals strategic for the generation of the so-called clean energies are also natural resources and, as such, are exposed to over-exploitation for the sake of profit and to the consequences that come along with it. For example, one of the extraction methods used to obtain lithium is open-pit mining, which has serious environmental repercussions and has been the cause of severe territorial conflicts.

Moreover, we have to consider what will happen when we convert these materials into waste, and they are thrown back into the environment, which would turn them into one more contaminating element. This is another matter to take into account when discussing government policies.

A Critical Point to Secure the Future

Transport is of great importance for the global economy and for every activity, we perform daily. Because of its high environmental impact, transforming it is imperative for the planet’s recovery. To achieve it we will have to modify our way of life completely since it is deeply rooted in the burning of fossil fuels.

The shift will require governments, companies and consumers to work together, as well as the collaborative efforts of interrelated sectors, such as power, tourism, commerce and others. There are already alternatives insight and actions in motion; however, there is lots of work to do and a long way full of challenges before us. Now is the moment to invest in a future for everybody. Let’s not forget what we have learned up until now. We know what we have to do and that we will not get a second chance to do it, so all that remains is taking action.

MEXICOM LOGISTICS IS A 3PL DEDICATED TO OFFERING RELIABLE TERRESTRIAL FREIGHT TRANSPORTATION AT AFFORDABLE PRICES THROUGHOUT NORTH AMERICA. FIND OUT MORE ABOUT OUR SERVICES HERE. 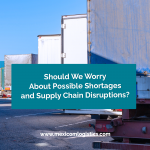 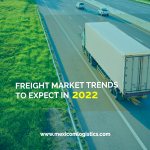