In this article, we analyze all the events that lead to a historic increase in fuel prices in the United States and Canada, which has caused a ripple effect that has caused a sudden increase in ground freight for international shipments moving across the  North American Trade Zone. In our analysis, we intend to answer questions such as Why do fuel prices and ground freight rates between Mexico, Canada, and the United States keep increasing exponentially? And When freight rates will go down?  In addition, we will present an infographic comparing diesel prices in the three countries of North America and their evolution (increment) over the last months. Finally, we will provide information on what shippers can do to navigate the present crisis.

Why fuel prices and international freight rates between Mexico, the U.S., and Canada are so high?

The answer to why fuel and freight prices are rising is complex. It includes the enumeration of several events that have aggravated the situation of an industry already hurt and in crisis. 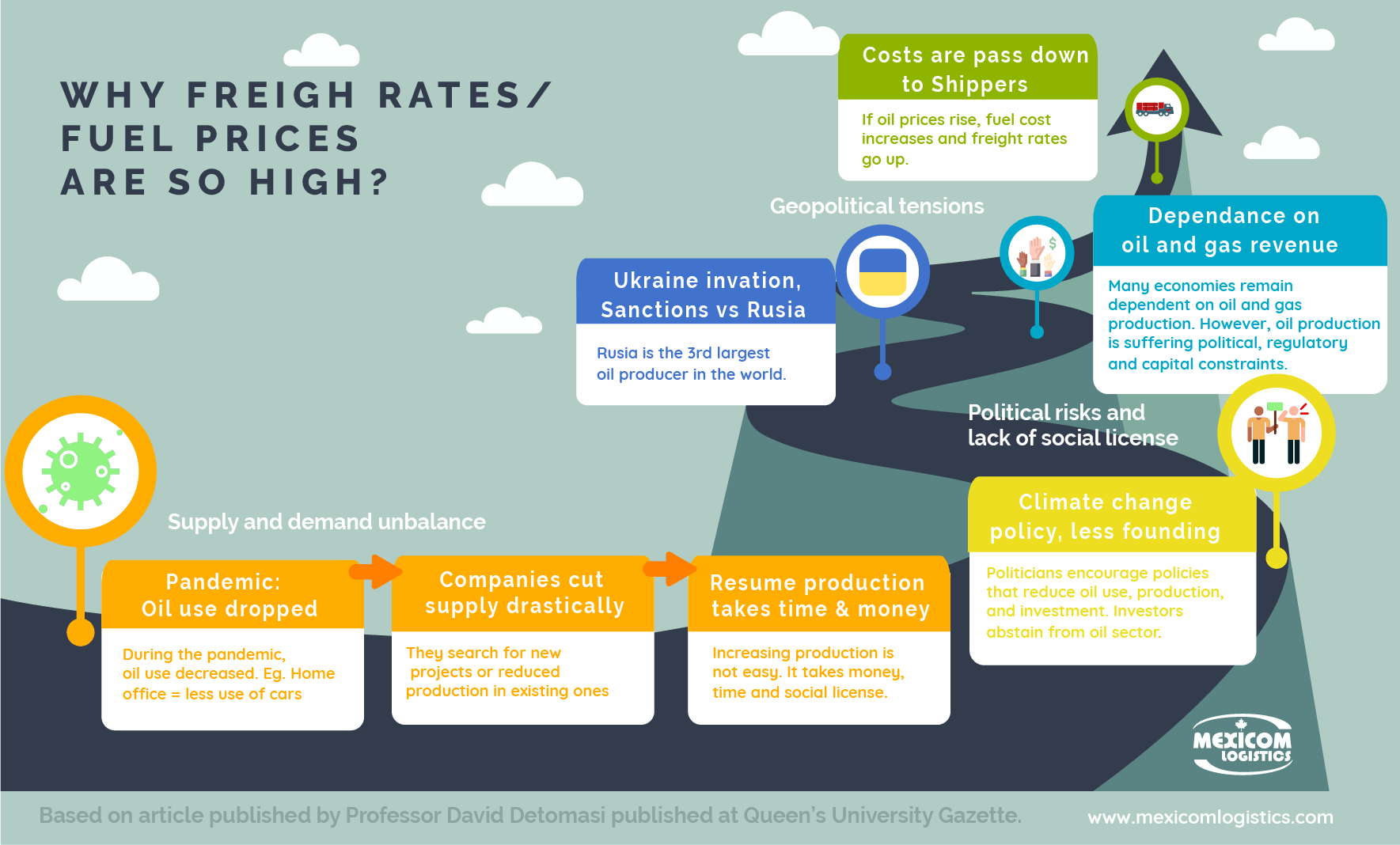 The COVID-19 crisis caused a significant reduction in the demand for oil and gas. For example, by working from home, many people have reduced their car use and thus their gas consumption. But not only at that level, one of the industries with the greatest economic importance for the North American Trade Zone, such as auto parts and equipment, remained in the top 5 of the industries most affected by the pandemic. The drop in demand for fuels caused companies in this sector to diversify their activities, venturing into other projects or drastically lowering production.

After confinement measures to prevent COVID-19 spread have been lifted, fuel demand increased again. However, supply had already dropped. And the resumption of hydrocarbon production is not instantaneous, it is a complex issue that involves not only time and money but also social license. We will address this last point in the next section.

Although many countries still depend on oil and gas production to sustain their economies,  the oil and gas sector has lost support thanks to policies that combat and mitigate climate change. In these times, supporting an initiative that encourages the development of the oil and gas industry is often seen as a great political risk. Thus, public policies focus on reducing the use of hydrocarbons, causing the industry to suffer from high regulation and lose both social support and economic investment.

– In this point, Mexicom Academy, on behalf of the Mexicom Group, makes a parenthesis to remember that our thoughts and prayers are with all the people affected by the Russian invasion in Ukraine. We are in favor of peace among all nations and respect for life and human dignity. –

We continue with the explanation of the geopolitical factors that have had an impact on gas and oil prices. The Russian invasion of Ukraine has been openly disqualified by many nations that have tried to unify efforts and apply sanctions to Russia. However, with Russia being the third-largest oil producer in the world, the sanctions – although not fully in effect yet – have an impact on the cost of fuel. For example, many European countries depend on the Russian oil supply for their transportation.

In another of our articles, we described the current state of the freight transport industry in North America, where we mentioned events that, added to the latest events,  have contributed to the crisis. Such as the truck drivers’ convoys that originated in Canada and then emerged in the United States; unprecedented weather conditions with snowstorms in places never seen before, absenteeism due to illness, as well as new regulations, such as the Carta Porte Complement required by Mexico.

How much has the cost of diesel increased in Mexico, the United States, and Canada?

Fuel prices in Canada and the United States have reached record highs. 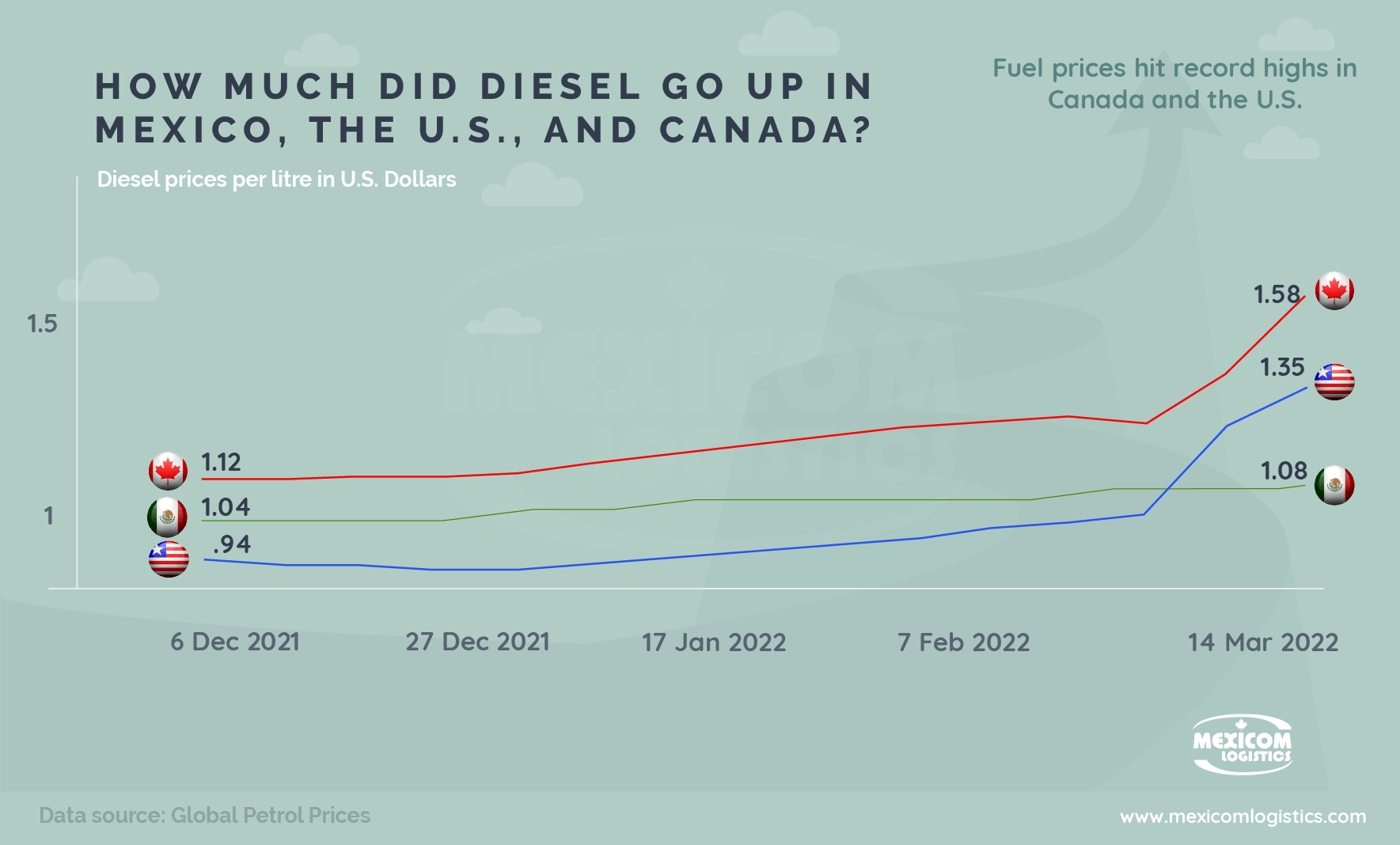 The following table shows the increase in the price of diesel in three major cities in Canada. The price is given in Canadian cents per liter of diesel.

In Mexico, diesel has not increased dramatically as in the other countries. The price per liter of diesel rose only .04 cents from December 2021 to March 14, 2022.

Example of the increase in land transport rates:

Beyond the statistical data, let’s look at a specific example of the increase in the cost of freight transportation between Mexico and Canada.

Increase Report: 200% increase over the course of 30 days.

From the forecast on freight rates, we know two things with certainty. First, prices will continue to rise. Second, no one knows for sure how long the increase will last and how big it will be. In January, some 3PL providers were forecasting a 6% increase in rates for Full Truckload Shipments, two months later,  they are already talking about a more than 9% increase. The truth is that the volatility of the markets has been constant, so it is very difficult to determine when freight transport rates will stabilize.

The price projections are based on several factors, including the behavior of the rates in the same period last year, inflation, the price variation during the last days, as well as the political, social, and economic factors that have already been covered in this article. Below,  we present a graph of the DAT, which illustrates with a specific example the behavior of ground freight rates. This is an example of a freight shipment from Laredo TX to Toronto, ON. In it, we see an increase of almost 2000 USD in the freight rate. 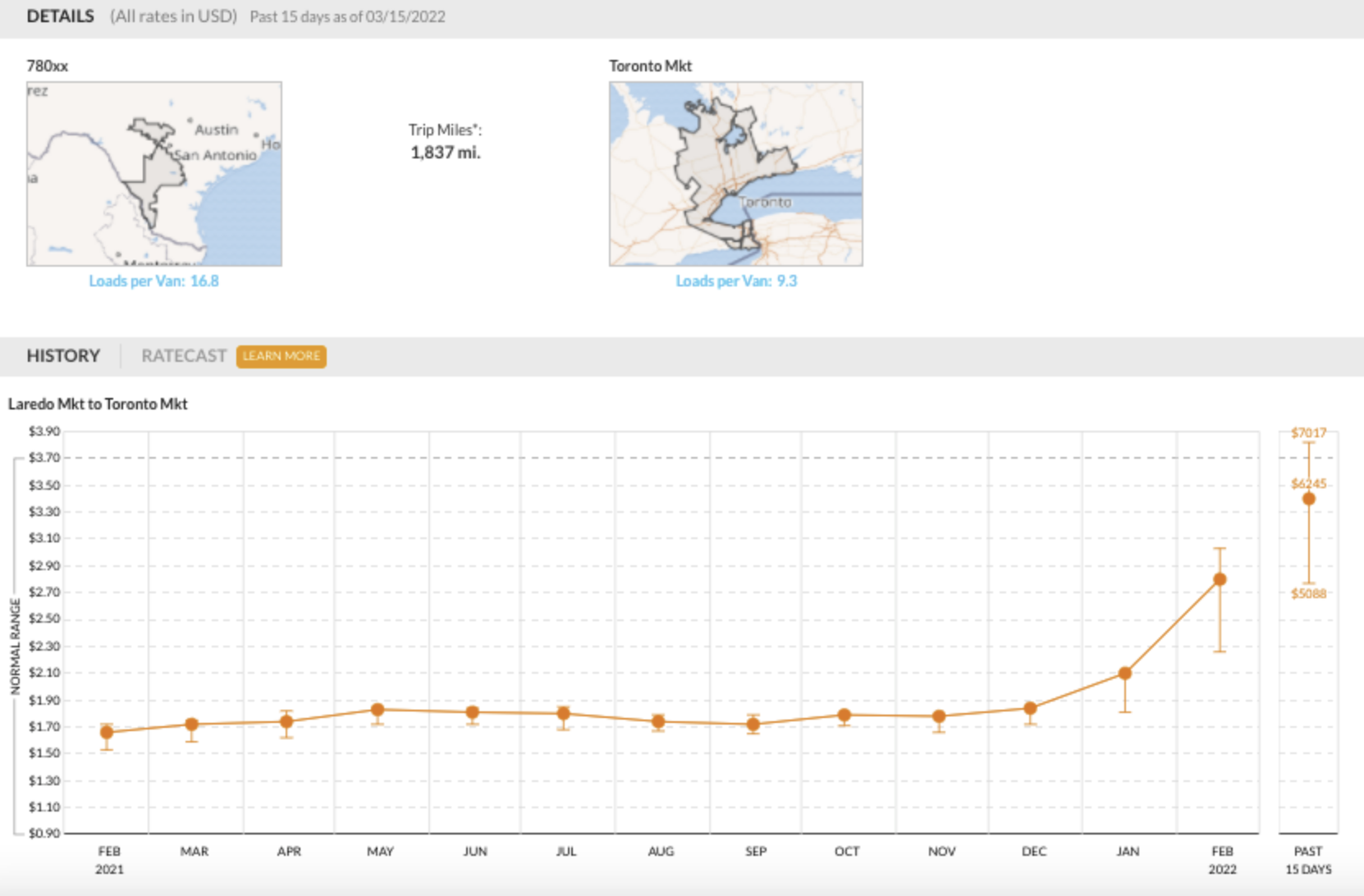 Probably the end of the conflict in Ukraine could bring some stabilization, but there are still no certainties. The other variable that would certainly help pull the rates down is demand suppression -as happened in the 2018 crisis in the United States. However, have not seen signs of this happening any time soon. In fact, the boom of the e-commerce industry is still in full swing and continues to have favorable forecasts.

What measures should international shippers take? 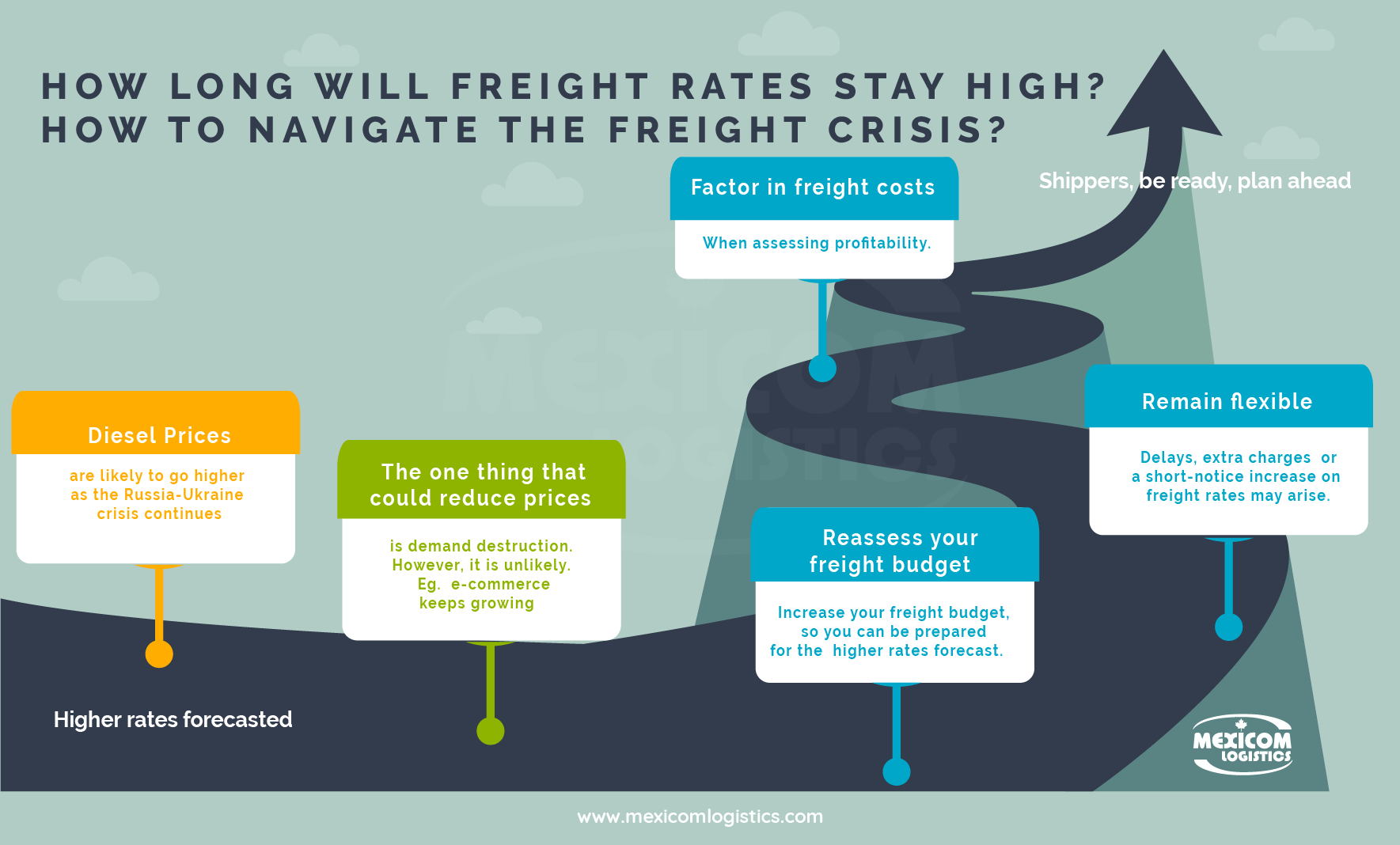 1- Reassess the budget dedicated to the transportation of goods.

As we have seen throughout this article, international freight rates between Mexico, the United States, and Canada have increased radically. It is time to reassess the budget allocated to this cost. Contact your logistics provider Mexicom Logistics at info@mexicomlogistics.com and request the updated rates for the shipments you move frequently and ask us about our forecast for your specific lanes. This way you will have a clearer idea of ​​how much budget to allocate to the transport costs of your product.

Create risk plans that allow you for flexibility of action in the event of delays, extra charges, or last-minute rate changes. The only certainty for now in the international freight forwarding market is its volatility. Being prepared and having previously evaluated different scenarios will allow you to make quick and accurate decisions.

Obviously, the increase in transport rates will have an impact on the profitability calculation of your company. Take a step back in your business plan and re-evaluate the profitability of each product or service. Include the new rates, as well as a prospective analysis in your new calculation.

4- Stay informed about the state of the industry

It is clear that knowing the panorama of the industry, current challenges, and cost trends is the first step in planning purchasing strategies and budget projections, as well as calculating profit. Subscribe to Mexicom Academy, to receive the latest updates on the industry and trends, as well as detailed and easy-to-digest educational material, with infographics. All totally free. 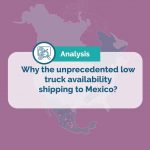